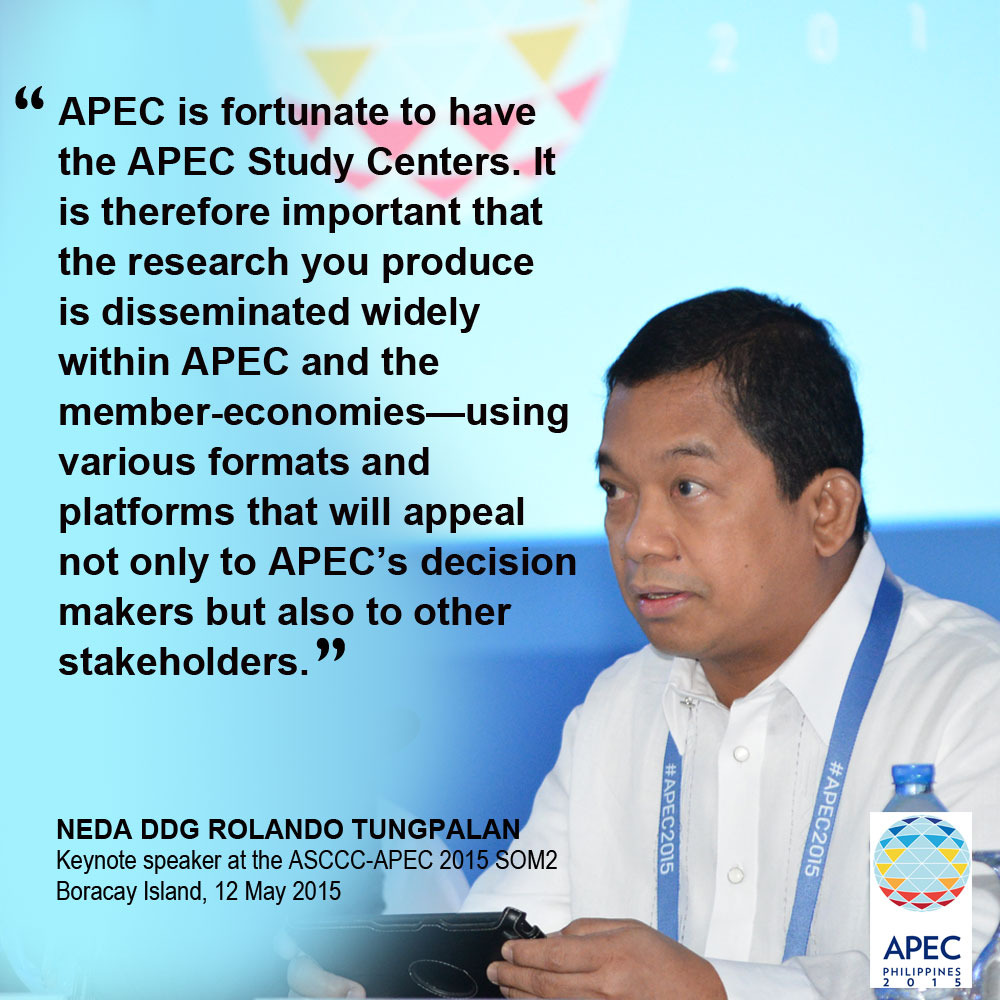 BORACAY ISLAND—Research plays a crucial role in raising awareness and facilitating discussions of important Asia-Pacific Economic Cooperation (APEC)-related issues and processes to help support the vision and goals of APEC.

In his keynote address at the opening of the 2015 APEC Study Centers Consortium (ASCC) Conference in Boracay Island on May 12, Deputy Director-General Rolando G. Tungpalan of the National Economic and Development Authority noted that the APEC study centers have been instrumental in fostering regional cooperation among tertiary and research institutes in the APEC region through the promotion of increased academic collaboration on key regional economic challenges.
According to Tungapalan, the analytical work that the APEC study centers put in will be valuable in sharpening policymakers’ tools for addressing cross-cutting issues especially on services, trade and investments, supply chain connectivity, and enhancing regional economic integration through the Free Trade Area of the Asia-Pacific. He added that through careful analysis of these issues, APEC will have a better chance at putting ideas and plans into action, and will be able to craft more effective solutions and anticipate problems before they occur.

In the case of the Philippines, Tungpalan cited the numerous studies conducted by the Philippine APEC Study Center Network (PASCN) that have provided policy recommendations that aided policymakers in formulating national plans and strategies.

The PASCN, which is being led by state think tank Philippine Institute for Development Studies (PIDS), have produced a number of scholarly publications containing research studies on competition policy, coalition building and APEC, China’s economic growth and the ASEAN, education and globalization, sustainable tourism, and the Philippines-Japan Economic Partnership Agreement, among other topics. In 2014, the Philippine Department of Foreign Affairs also commissioned the PASCN through the PIDS to undertake the Research Project APEC 2015 that sought to provide the analytical framework for the substantive priorities and initiatives that the Philippines will advance as the APEC host economy this year.

“Without a doubt, the APEC Education Leaders’ Initiative launched in 1993 and the motivation behind the establishment of the APEC study centers in the different APEC member-economies has lived on. The study centers are steadily gaining ground and will continue to do so with the support of the APEC Secretariat,” Tungpalan emphasized.

He likewise emphasized the critical importance of advancing the APEC agenda at the local level. “Mainstreaming the agenda not just in national development plans but also in local development plans is necessary, and this can be achieved through continuous education, information dissemination, and advocacy.” He challenged the academic and scholars comprising the APEC study centers to serve as “envoys on APEC-related matters”.

“Your direct interaction with your students, fellow educators and researchers, and program implementers and decision makers in your localities make you excellent go-betweens between APEC and the local communities,” Tungpalan noted.

Meanwhile, Fernando Aldaba, Dean of the School of Sciences of the Ateneo De Manila University, highlighted the growing importance of regional cooperation through APEC.

In his opening statement, Aldaba noted that despite the moderate economic growth experienced by most countries, the world is still confronted with the twin problems of poverty and inequality, and recently, disasters and catastrophes caused by climate change.

Aldaba added that the inputs and discussions on the APEC subthemes are critical ingredients in the formulation of truly inclusive and sustainable economies in the Asia-Pacific region.

APEC Secretariat Executive Director Alan Bollard, represented by Dr. Akmad Bayhaqi, said the 2015 priorities of APEC reflects the strong emphasis it gives to development issues within the framework of regional economic integration. He added that the global economic outlook for this year shows ample opportunities. However, the International Labour Organization noted that global unemployment increased by 5 million in 2013 and is reaching 200 million because of uneven economic recovery and modest growth.

Dr. Bokhwan Yu, Deputy Dean of the Asian Development Bank Institute (ADBI), emphasized that for growth to be truly inclusive in the APEC region, governments, together with the private sector, academe, and civil society, should work together.

“Achieving inclusive growth in the region is hampered by various issues and there is no single solution to solve all these problems,” Yu stated.
The ASCC Conference, he said, provides an opportunity for researchers in the region to share knowledge and find solution to make growth more inclusive.
According to Yu, there are more than 5 million people who are still living below poverty in Asia alone, with income inequalities also rising in recent years.
“One solution to solve poverty and achieve inclusiveness is through the development of SMEs, which have the potential to provide jobs to people. However, SMEs must be able to participate in the global value chain to benefit more from greater integration,” Yu explained.

The ASCC Conference provides an opportunity for academics and scholars to discuss and exchange ideas on the APEC themes and to identify areas for regional collaboration among the APEC study centers.

Outcomes of the conference may serve as inputs to the different APEC working group discussions and may be integrated in the APEC Leaders’ statement. There are over 50 study centers in 20 of the 21 APEC member-economies. Conference details and updates may be accessed from ascc2015.org, pids.gov.ph, @PIDS_PH, and https://www.facebook.com/PIDS.PH.